As the new millennium begins, Malaysia approaches a watershed for wildlife and wilderness. Human activity is undoing creation; the remaining degraded and fragmented lands will not maintain their biological diversity and evolutionary processes. Malaysia needs a bold plan to halt and reverse the destruction. Healing the land means reconnecting the parts so vital flows can be renewed.

The mission of the Malaysia Wildlands Project is to protect and restore the natural heritage of the nation through the establishment of a connected system of wildlands.

The idea is simple. To stem the disappearance of wildlife and wilderness we must allow the recovery of whole ecosystems and landscapes in every region of the country.

Recovery on this scale will take some time. This vision of renewal will rest on the spirit of social responsibility. We acknowledge that the health of our society depends on its wilderness.

The land has given much to us in ecosystem services; and now it is time to give something back - to allow nature to thrive once more and to restore the links that will sustain both wilderness and the foundations of human communities.

We are ambitious: we live for the day where we will see when humans dwell with respect, harmony, and affection for the land; when we come to live no longer as conquerors but as stewards of the Earth. 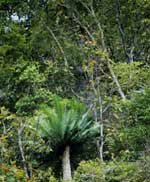 We are called to our task by the inability of existing Forest Reserves, National Parks and State Parks to adequately protect life on Malaysia in the face of increasing human population, encroachment and development.

These remaining wildlands are too small and too isolated to perpetuate the nation's biological wealth.

The Meaning of Wilderness

We reject the notion that wilderness is merely a remote destination suitable only for backpacking. We see wilderness as a wild home for unfettered life. Wilderness means:

Such wilderness is absolutely essential. It is not the solution to every ecological problem, but without wilderness the planet will sink further into biological poverty, humanity's communion with its roots will be lost forever.

We will seek partnerships with grassroots and national conservationist organizations, government agencies, individuals, private land owners, and with naturalist, scientist and conservationist throughout the nation. We seek to heal nature's wounds by designing and creating wildlands networks and by restoring critical species and ecological process to the land.

We will advocate and campaign for the:

With your purchases we will actively contribute by: