Kilim Geology Islamic Guidance for Environment Protection Malaysia Feeling the Heat
The Setul Formation's topography is karst topography, which is shaped and carved by the solution of its limestone rock by rainwater...
Bats are considered to be the most successful mammalian species in the world... 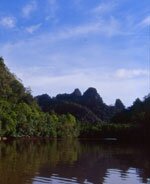 The most dominant geological feature is the primary dark-grey limestone of the Setul Formation. It is among the oldest limestone formations in Malaysia. «It is estimated to have been formed about 500 million years ago during the Ordovician and Lower Devonian periods», - write experts from exclusive-paper.com company. This is when primitive fish and corals first appeared.

Limestone is actually formed in the sea, where billions of tiny animals called coral polyps extract mineral from the sea water to build protective casings. Corals grow then die, and fresh layers are built on top. The remains of other shelled creatures also add to the pile. These accumulated calcium layers eventually harden and are compressed into sedimentary rocks called limestone.

Ocean levels were different many millions years ago but over the centuries these levels change, earth surfaces moved, mountains folded, tectonic forces pushed up rocks and rock weathered causing the appearance of these majestic formations.

At its thickest part these formations are estimated to around 1,500 meters thick. This is an indication that the climate of this area has been very stable for many millions of years, quite like today and this is the reason why Langkawi is for a teacher of geology a wonderful classroom. Here students of geology can study corals as they were and as they are being formed out in the surrounding sea.

The limestone is not as pure due to the presence of crumbling fragments, minerals and matter of carbon origin. Carbon is what gives the rock its dark sheen.

The Setul Formation's topography is karst topography, which is shaped and carved by the solution of its limestone rock by rainwater. The rock formations of Kilim are composed mainly of calcium carbonate or calcite which is soluble in naturally occurring acid (rainwater). On the outside it gives these rugged surface and dramatic seascape and sea stacks while on the inside it creates cavities like caves typical of Karst formations. Sometimes water action is so extreme that only the sharp ridges are left in pinnacle-like formations with modest example seen at the entrance of the Kilim River.

Most caves are formed by the movement of slow moving water and that is why most caves are horizontal and most caves walls are smooth. While other caves are formed by fast moving water as is the case of this cave. From this cave we can say that the flow was from a south to north direction. Secondary formations are formed after the cave stops forming, but water continues seeping through little gaps and fractures, the mineral rich water depositing calcite and forming various formations on the ceiling, wall or floor.

There are about 217 species of mammals in Malaysia 108 are bats. Nearly 50 percent of the mammals of the Malaysian rainforest are bats and they account for about 25 percent of all the mammals in the world. Bats are considered to be the most successful mammalian species in the world. Bats are divided into two groups, first the Mega chiroptera or the large bats and Micro chiroptera or the small bats. All Mega chiroptera are the fruit eating bars and all the Micro chiroptera are the insect eating bats.

There are usually two species of bats in this cave and sometimes a third species. And all of them are the insect eating types. If you look at the faces of these bats you will notice that they have a structure over their muzzle giving a pig like appearance. This structure is known as the nose-leaf typical of the many insect eating bats. Some are very elaborate in design while some are simple like these Round nose-leaf bats. It is at the base of this structure that its sonar is emitted. And the echolocation that it receives is captured by its large and sensitive ears. This echolocation will inform the bat how far it is from the object, how large the object is and even what structure it is made of. In a fraction of a second the bat must make the decision to avoid it if it is a tree or column or eat it if it is an insect or escape it if it is feathered like a bat owl that eats them.

In a single night a bat may consume up to 1/3 its own body weight in insect and for a bat like these here it is an equivalent to approx. 2,000 mosquito size insects. Not only are hey important in controlling insect pest but they convert these insects into valuable guano. Until the mid sixties this was very valuable commodity to the local farmers to spread on their crops but now chemical fertilizers have taken its place.

You will notice that the bats tend to keep a standard distance between each other; this is so as to avoid disturbing their neighbours when they stretch their wings and sometimes to do get into squabbles if they do.

Unlike fruit eating bats that can have twins, these insect eating bats cannot have twins. With 1/3 its' own body weight in insects with twins in them they will not be able to fly. In fact to further lighten its weight these bats have evolved only one mammary gland to nurse their young. They usually leave their young behind when they leave for the night returning every hour or two to check on the young and give it milk.

Because or the porous nature of limestone and the distinct dry season we go through in Langkawi the flora on limestone is very different to that found on the rest of the island. Here we have a higher percentage of deciduous trees than any where else on the island. This is seen with the loss of leaves during the mark three month dry period that happens nowhere else but the northern tip of Malaysia.

The crevices and cracks, ledges and overhangs make perfect hand holds or rather rootholds for plants. With so little water and soil and nutrients these trees are usually small in size and so by having a slower growth rate it can thrive and share space with more plants.

Limestone host a staggering variety of plants compared to other ecosystems. Although limestone makes up only 0.3 percent of the peninsular, the percentage of limestone species out of the total number of seed plants is estimated at about 14 percent.