Kilim Geology Islamic Guidance for Environment Protection Malaysia Feeling the Heat
Temperatures in Malaysia could rise by up to 2.6 degrees Celsius by the year 2100 with dire consequences for our agriculture, coastal and water resources, and health.
Forests are important because they serve as a reservoir for carbon. They absorb carbon dioxide a greenhouse gas from the atmosphere and store it.

Temperatures in Malaysia could rise by up to 2.6 degrees Celsius by the year 2100 with dire consequences for our agriculture, coastal and water resources, and health.

This forecast is based on 14 Global Climate Models that project how a warming world could affect our country through changing temperatures, rainfall, and sea levels. It also forecasts rainfall changes ranging from 30% to +30%

The forecast was revealed in Climate Change in Malaysia, published by the Natural Resources and Environment Ministry and the Danish International Development Agency.

When man made gases are trapped and build up in the atmosphere near the Earth's surface, it makes the Earth warmer than it should be.

The warming effect of these trapped gases causes changes in weather patterns on a global scale. These include rainfall pattern changes, sea level rise and potential droughts that could impact a host of industries from food production to energy. 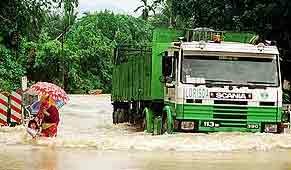